With the emergence of the Geneva Convention, Refugee Law took a turning point in 1951. Indeed, it settles principles specially one, which is well known in international law: the principle of non-refoulment. This principle means that whenever there is a risk of danger to a person’s life in their country of origin, there is an obligation to protect and welcome those people. But the Geneva Convention does not refer to climate refugees, there are no conditions for climate situations. So, why not refer to them as migrants? The issue here is that a migrant, in international law, is a person who makes a choice, the choice to leave their country not because of threats or wars but for opportunities. Some migrants want a better life others just want adventure.

The Concept of “climate refugee”

By 2050, millions of people are at risk of being displaced and asked for being recognized as refugees. They are migrants that move due to climate change or natural disasters. Most of the time these victims move to their region of origin. Some are forced to go abroad because of the dangerous situation, the poverty there, and the probability for it to happen again in the same area. Europe and North America are some of the most developed nations and are more equipped to adapt to climate change and its consequences. Indeed, poor countries do not have many resources to adapt to climate change. People touched by climate change lose everything, and in most cases have to rebuild a whole new life. 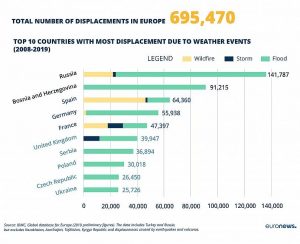 Displacement Due To Weather Events – Euronews

Originally, the Geneva Convention of 1951 was created as a remedy for European refugees after the Second World War. Now, we still use it because the refugee problem regenerates at a different time and in different situations such as climate changes. The obstacle in the common definition of “climate refugee” is that migration can be forced or voluntary. Some climate victims have a choice that others don’t have, it depends on the consequences of the natural disaster and the countries where it is happening. A clear policy is very difficult to achieve. The Paris COP21 Agreement mentioned this situation even though they didn’t explicitly use the term “climate refugees”. Indeed, their goal is to minimize displacement related to the adverse impacts of climate change.

“We are still not fully aware of the consequences of climate change for our people and communities and how this is linked to migratory flows. At the international level, there isn’t really a description or definition encompassing the group of people we call “climate refugees” and we are not even sure if the latter is the right term to describe them at all”, Carlos TRINDADE, President of the EESC’s Study Group on Immigration and Integration.

The European Union has not recognized yet climate refugees in any legislature, but climate change is also having its consequences in European countries. Indeed, in some countries in Europe, there is a high number of displacements due to climate events. According to Internal Displacement Monitoring Center (IDMC), the countries concerned are for example Spain, France, Portugal, and also Germany. Those countries are touched by wildfires and floods mostly. In a territory of France for instance, the rising sea level caused the flood in La Faute-Sur-Mer in 2010 and killed 29 people, others got displaced. We also have the different cases of wildfires in Greece, the fires destroyed trees which were very important to the locals, they rely on them for their production of honey or olives. It also caused displacement and people were injured by the fires. These are just some of many other cases around the world. 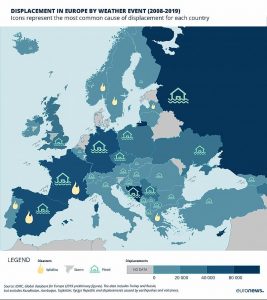 “Semra Tosuni is our content creator from France and is a law student at Jean Moulin University in Lyon. She joined Circle of Sustainable Europe (CoSE) because she believes it gives her the opportunity to be part of the change and also to share her knowledge by writing articles about climate change in order to raise awareness. 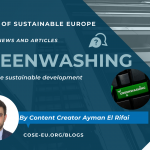 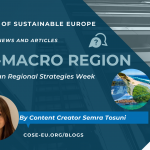