The European Association of Environmental and Resource Economists

The European Association of Environmental and Resource Economists is a global scientific association that operates in more than 60 countries, not only from Europe, and was founded in 1990 after its first annual conference that took place in Italy. The association aims to encourage collaborations across European universities and research institutions as well as improve the communication between researchers in climate and resource economics. This year, the association’s members will vote for one president and two new members of the council. The elected president will only join as a president-elect in 2022 and 2023 to later serve as a president in both 2024 and 2025 to finally serve as past-president in 2026 and 2027. There are two candidates running for this position, Simone Borghesi and Valentina Bosetti, both from Italy. The two new elected members of the council will serve for four consecutive years starting next year, and the four candidates are Enrica De Cian from Italy, Klaus Eisenack from Germany, Mads Greaker from Norway, and Åsa Löfgren from Sweden.

One of the two candidates for President is Simone Borghesi, an Italian professor of Environmental Economics at the University of Siena and at the European University Institute. Borghesi has previously graduated from the University College London, England (UCL) with a Master’s of Science in Economics in 1996 to later pursue a Ph.D. program similarly in Economics at the European University Institute, Italy (EUI). While pursuing his studies, the candidate worked at the International Monetary Fund (IMF) in the United States as well as an Italian research center named Fondazione Eni Enrico Mattei (FEEM). He then worked for four years as an Assistant Professor at the University of Pescara in Italy to later be invited as a visiting scholar to the INRA in France, the University of Cambridge in England, and finally the ETH in Switzerland, in the years 2013, 2015, and 2016 respectively. Currently, he is Director of FSR Climate, the climate research group at the Florence School of Regulation of the European University Institute, and Secretary-General of the Policy Outreach Committee of EAERE. Moreover, his research focuses also on globalization and sustainability of development, a passion that allowed him to publish three books and more than eighty articles that were later edited and peer-reviewed. 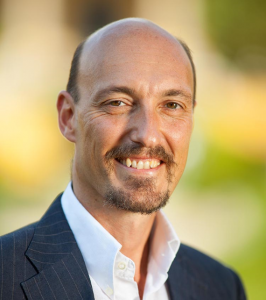 Borghesi stated: “I would like to express my gratitude to the Nominating Committee for proposing my name for the EAERE Presidency and to the Council for supporting the proposal”. He added that it would be an honor for him to serve the association in which he feels at home and listed the objectives and plans he would work on implementing if elected. His plans include: Increasing the influence of the EAERE on the making of policies by reinforcing the communication with policymakers and stakeholders, strengthening the cooperation between the associations and national associations such as the Italian Association of Environmental and Resource Economists (IAERE) which the candidate is one of its council member and even previously served it as president. Additionally, he plans on launching a program that aims for growth opportunities for Ph.D. students and young researchers, named “Next Generation EAERE”.

We approached him to know more about his proposal named Next Generation EAERE. In this respect, he told us: “I think investing in young scholars is crucial because we need fresh forces and new ideas coming from young people to think out of the box and find a way out of many environmental problems. Moreover, young students and researchers will be the ones who will have to face the environmental challenges in the longer run, therefore I believe their voice and opinion is particularly important within EAERE.”

After becoming a member of the EAERE, voting can be done electronically and ends on the 10th of July 2021, as the results will be later shared publicly in the middle of the same month. The EAERE encourages its members to vote because both the president and the council of the association have a huge influence and impact on its organization, decisions, shape, and most importantly, its future.

“Ayman El Rifai is our content creator from Lebanon with a Bachelor’s degree in Business Administration from the American University of Beirut. He joined Circle of Sustainable Europe (CoSE) because he believes in the importance of adopting a sustainable approach in our everyday activities and on the corporate and governmental levels.” 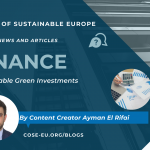 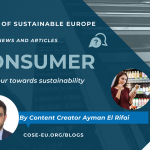