On June 26th till June 28th Al Gore gave the 38th training to approximately 700 upcoming Climate leaders in Berlin about how to actively educate the people on the current climate crisis. According to the United Nations (UN) “the biggest crisis mankind has ever faced” As I was exposed to this information I questioned myself; Can we change this situation while it’s already this bad? Can I do something in my field of industry? According to Al Gore we can, will and must change this global problem.

Berlin, Germany the largest economy in Europe, phasing out coal is a critical part of the country. During the days of training the attendees were informed with hard facts about the crisis, in which Chairman Al Gore and President and CEO Ken Berlin presented facts in numbers, statistics and graphic animations of the past, present, and future of the Earth. To present some facts; the North Pole experienced 3 heatwaves in a row since 2016. Which is abnormal and will cause more global floods, rainfalls, and other events that occur four times more often than in several years ago. If this continues, climate change will likely lead to more food and water shortages, especially in vulnerable places on a global scale.

In 2015 the United Nations set up  The Paris Agreement, in which it acts as a guideline for all Parties involved, also dealing with the Sustainable Development Goals, known as the SDG’s thereby strengthen the global response to climate change. It’s great to have goals into the future and inspire other Parties to join as well. I think it motivates, innovates and opens up new possibilities for a more circular economic structure and environmental responsibility.

In-between all the presentations the attendees also had so-called “breakout-sessions” in which different topics were discussed. For example; Customize presentation, finding a target audience, sustainability – shaping our impact, communication tools for climate action and climate and health. Even though the breakout-sessions were well informed, the information I was exposed to was purposely simple and basic, in which the attendees could shape their message in their own way.

One of the best moments about those sessions was the networking part in my opinion. Different attendees from NGOs, companies and governmental organizations from all over the world where also part of these discussions and interactions. As an activist I could learn allot from different industries, on how they take care of their environment and social influence.

For extra information about different industries including the coal market, there were so-called “Panel discussions” let by different moderators. Including Chairman Al Gore; experts, CEO’s and other Chairman’s of different markets were present to discuss the circular economy and social sustainability changes. One of those speakers is Bas Eikhout, Dutch Member of the European Parliament for GroenLinks. He is a member of the Delegation for Relations with the People’s Republic of China. Amongst the Dutch delegation was our Mentor during the training Milan van der Meulen, entrepreneur and founder of Enie, a solar-energy company supporting the energy transition in The Netherlands and since 2015 Climate Reality Leader.

As the training came to an end I noticed that as a Climate Reality Leader, it’s important to take action with the knowledge gained during the training. That’s why there are “Acts of Leadership” every leader has to complete a minumim of 12 acts of leaderships types every year, to be able to be authentic and to get involved. Presentations are one of the most important acts, in which the Climate leader actively interacts with the audience involved. Q&A could be held at the end of those live presentations to get the audience engage even more, a great idea to show ‘quite detailed’ what the problem is my future generations are facing. The ultimate goal of this training is to inspire Climate leaders continuing driving the energy transition Globally, equip them with the know-how, tools, and network. 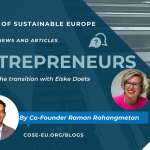 Online Masterclass “Entrepreneurs in the Lead” by Elske DoetsEuropean affairs