A place where young international leaders gather around connect and discuss with other entrepreneurs, business leaders, government officials and influencers to look for further future developments in Europe and around. This year on the 3rd till the 7th of September, the 13th Forum was realised in Poland in a city called Nowy Sącz. The goal of this meeting is to create a international think tank on a European level and to create an impact for every young leader to develop themselves.

Through the recent years we have seen many great and persuasive leaders lose their lives such as secretary-general from the United Nations – Kofi Annan, activist and politician -Nelson Mandela and formal president candidate from the United States – John McCain. These purposeful leaders represented a great example in today’s bipolar world of adversity, as the world around us changes every time it is considerably important to keep up this pace of innovation, technology and social adjustments. The 13th Forum for Young Leaders is therefore vital for the younger generation to communicate new ideas and connect with other like-minded individuals who have more experience in business to come up with innovative technologies that benefit society as a whole.

During the European forum there where three main topics: education, technology and economy, many headline speakers – including the Prime Minister of Education in Poland Anna Zalewska – where talking about a major transition in mainly these three categories, questions arise from: how do we anticipate on this “paradigm shift”? how do we keep our human values and soft skills relevant? And how do we keep our education system up-to-date? By engaging the young leaders they organised workshops, panel discussions and other activities regarding to further discuss the future of Europe in regards on these topics.

“A new revolution is happening, but is it happening in the right way?”

Because of this Digital transition and change security becomes a subject of discussion, Hans-Wilhelm Dünn – President of Cyber Security Council Germany told the audience during the panel discussion; “We have to understand our own programs and processes” he added “because there is a variety of experts and different programs it is hard to pick the right individuals on those programs and processes, let alone for example to find the suspected hackers behind the computers.”

Regarding to technology in the future – “A revolution is happening but is it happening in the right way? It is important as a start-up to make an efficient, useful and enjoyable product or service” – said by Predrag Tasevski Founder of IGK MK an organisation for cybersecurity in the Balkan region. – “With a great idea young people usually think that if their parents, spouse, neighbour likes it, it is worth it, well that is not important. What is important is that it is as simple as possible to use and the user gets the most out of it.”

“Big companies are to big for new ideas” – according to Saulius Bilys CEO of AB Amber Grid in Lithuania natural gass transmission operator – “the corporate structures are cutting the up tide of the risks, one start-up for one idea is the best approach, and don’t be afraid to lose” – Basically their are allot of new opportunities for young start-ups to implement new ways of innovation. It is important that data, critical thinking and creative approaches can tell the difference between a successful worthy business. 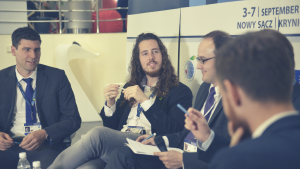 “Nothing is difficult, if one wants it”

From my personal experience I did not expect Poland to be so tradionally stunning in; culture, architect and hospitality, after de second world war I thought that Poland would be more modern, instead of that I truly get the feeling it kept its beauty that I respect and love about it – I did not expect to pay with złoty -. For example the Church of St Peter and Paul – constructed since 1597- was something that really caught my attentio

n. Although the sacred architecture survived for almost 4 centuries from war, religious conflicts and even acid rain, the brick and marble facade features life-size statues of the Twelve Apostles still remains. I can believe the church acts as a beacon for many tourists that visit Krakau, and they won’t be dissapointed to say the least.